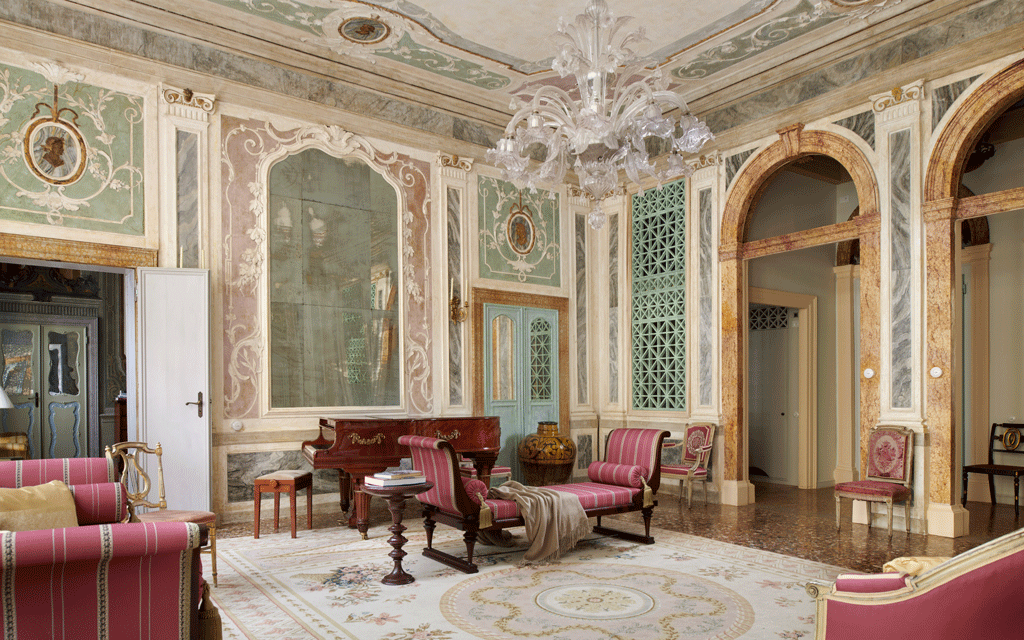 The apartment has been brought up to date by the introduction of new services using the latest miniaturised and wireless technology to minimise disruption to the historic fabric of the building. 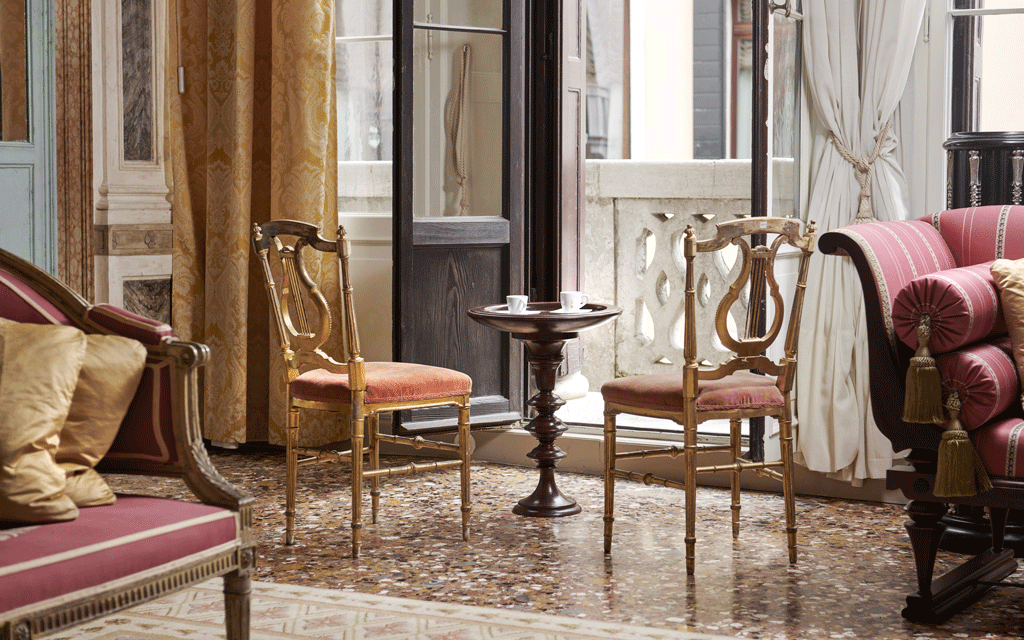 The Palazzo is a listed building and has some spectacular frescoes and Stucchi that the Institute di Belle Arti were very particular about. The building was built as a small palazzo by the Grimani family, perhaps as a ‘Casino’ for entertaining rather than living, as the building originally had large reception spaces but few secondary rooms. From the evidence it is clear that the suite of rooms facing the front had always been rather lavishly decorated. The building had been renovated a number of times since it was originally built, changed to reflect the fashion of the period and the changing taste of different generations of owners. In some rooms several layers of painted decoration were discovered. 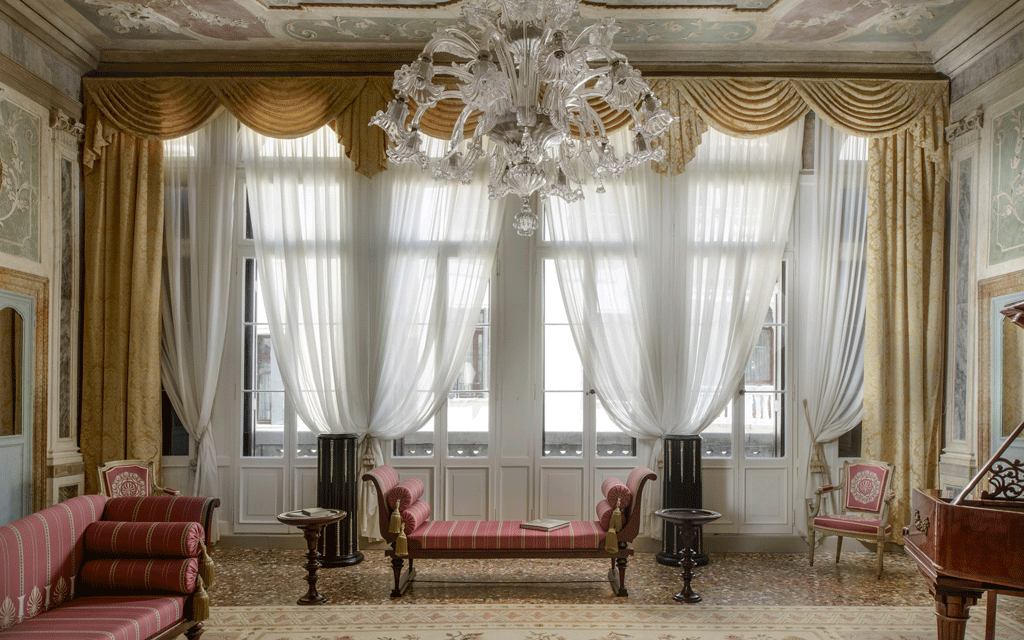 The scale of the reception rooms has been taken advantage of by the design as it is just right to be comfortable - big enough to be grand but unlike most Venetian Palazzi not too large and drafty to be impractical to use today- and there is an abundance of natural light from the east facing windows which gives it the advantage of the early morning sun without suffering the hot midday and afternoon sun. 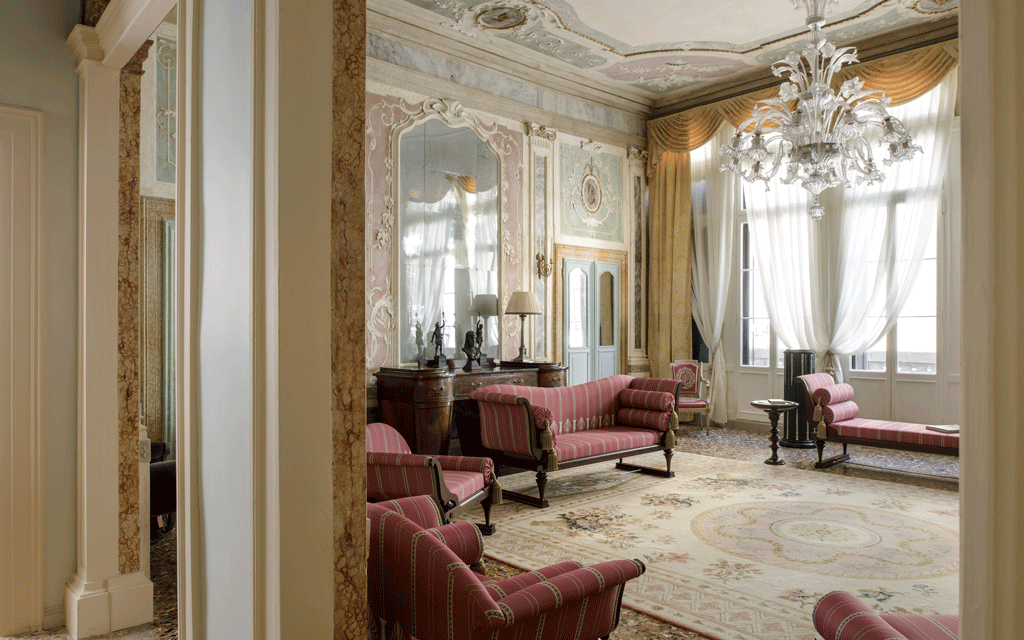 The rooms at the back that were used by the Bridge Club as service spaces were in a fairly dilapidated state devoid of historic features and the finishes had long since disappeared. This provided John Simpson Architects the opportunity to add two new suites of rooms with entirely new interiors thus adding a new dimension to the building complementing the historic interiors and continuing the classical tradition into the 21st century with a highly personal touch very much in the Venetian manner. 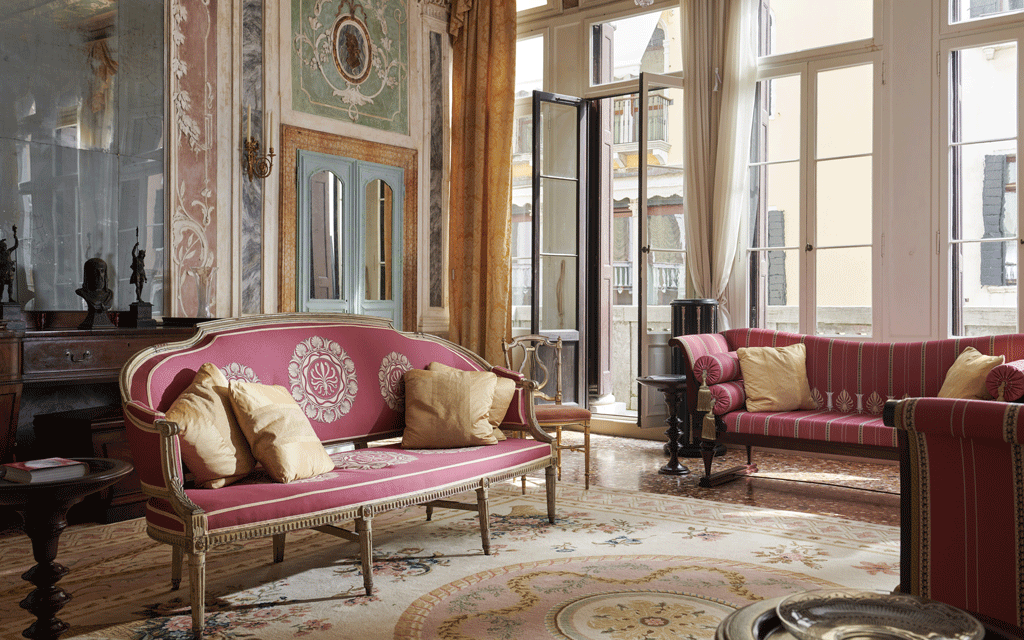 In the nineteenth century, the building seems to have passed on to the Musatti family who added the upper floors, Since 1964 it was the home for Circolo Bridge, the Venice Bridge Club which moved out of the building in 2012. 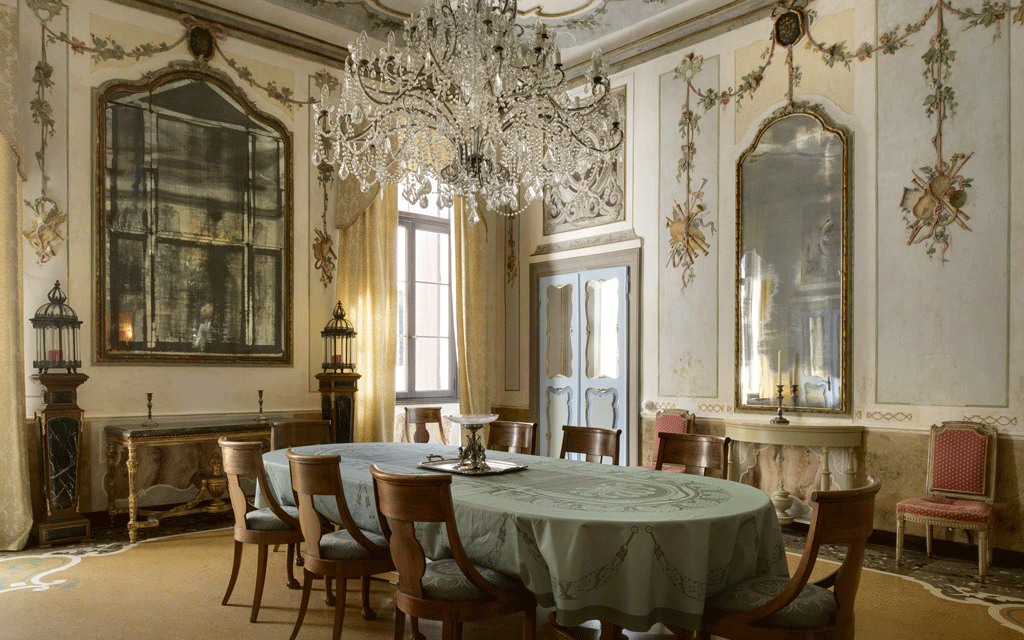 Interior view of the dining room 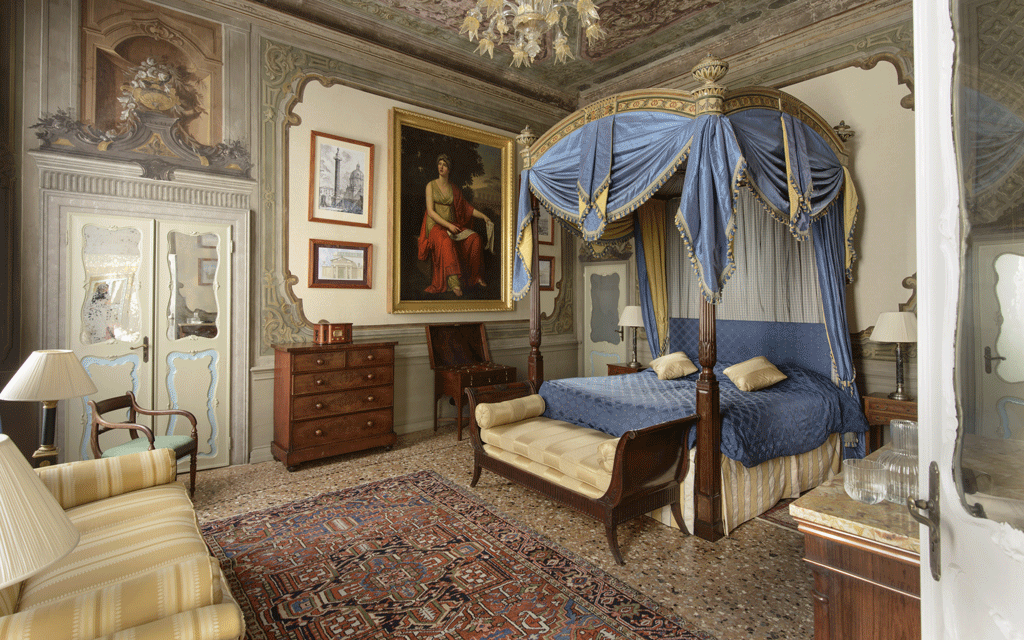 Interior view of one of the bedrooms

Other bedroom suites had to be carefully and imaginatively created using ingenuity within the historic fabric making use of existing features. 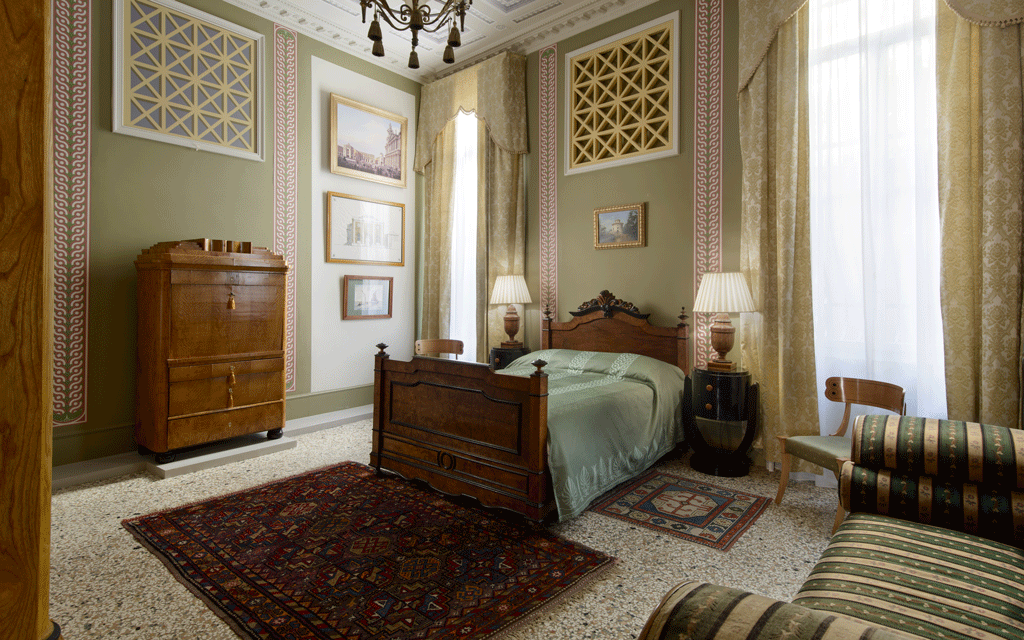 Interior view of another bedroom 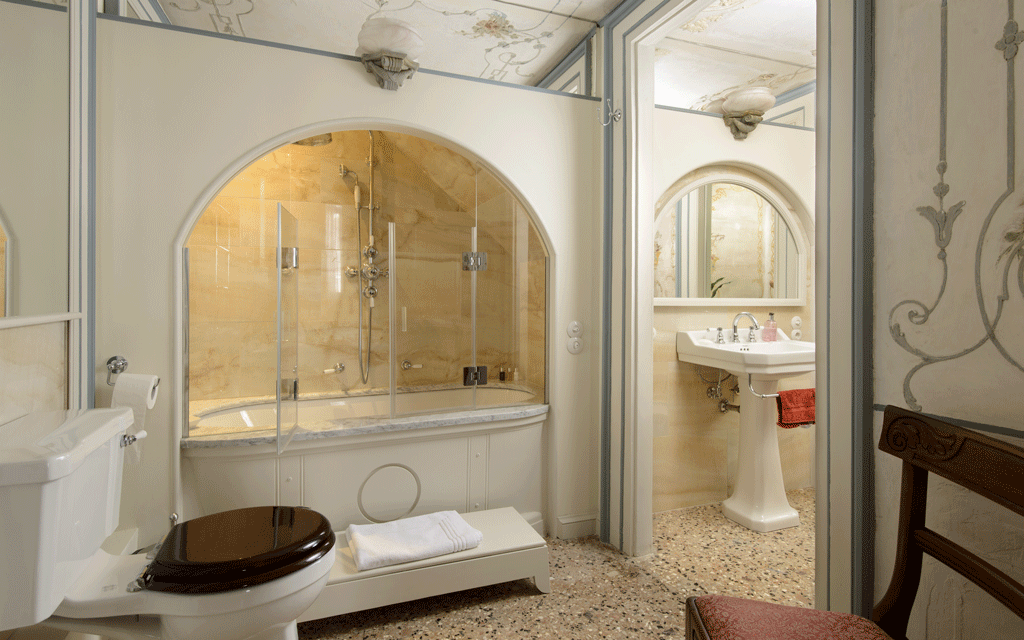 As the Piano Nobile had been the ‘Circolo Bridge’ the Venice Bridge Club it had no facilities such as bathrooms and Kitchens. It needed to be re-planned for residential purposes turning the Bridge Club WCs into a kitchen, removing the bar and supporting catering kitchen to create a new bedroom suite with dressing room and bathroom. 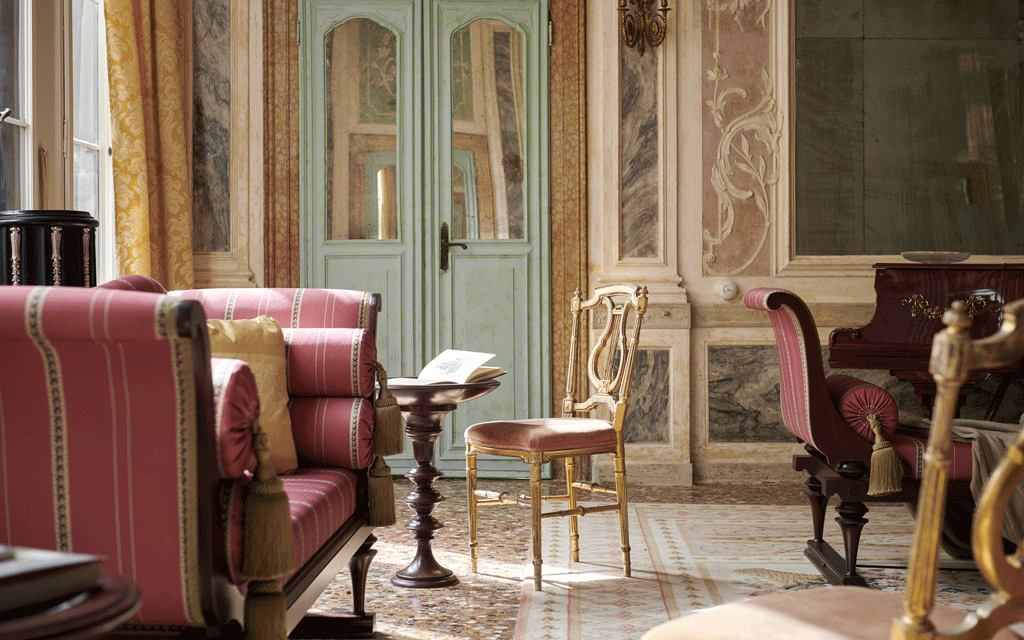 Like many others in Venice the building had been neglected for many years and maintenance seemed to have consisted mostly of covering everything in thick layers of paint. As layers of paint were removed it was astonishing just how much detail had survived intact. 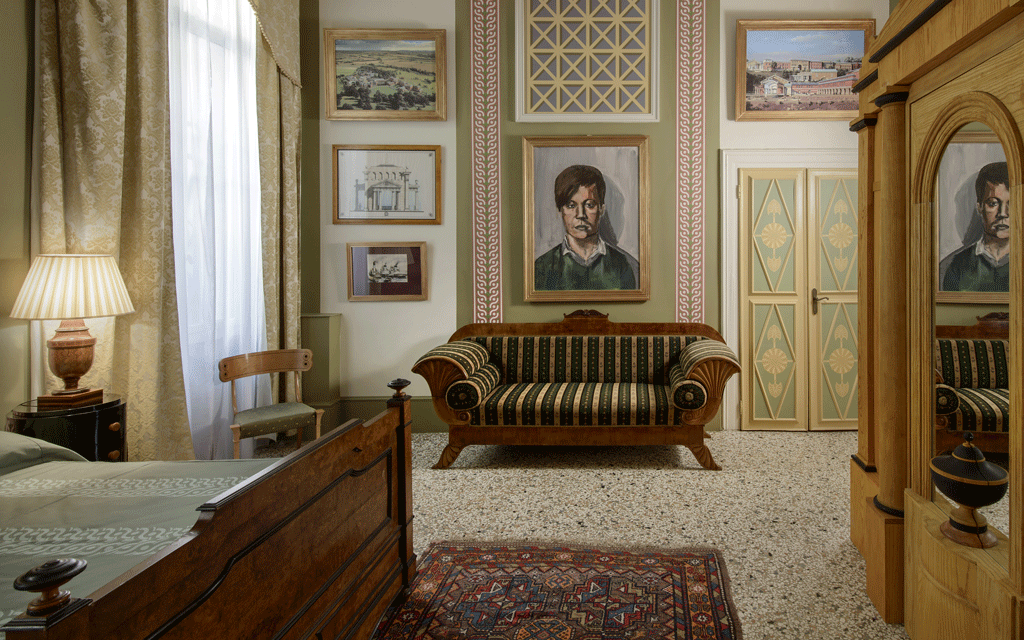 The unsympathetic elements and additions were removed and the historic features restored. Under the heavy wooden floors, possibly thoughtfully added for protection by the Bridge Club beautiful and rare Venetian terrazzo floors were discovered and restored. 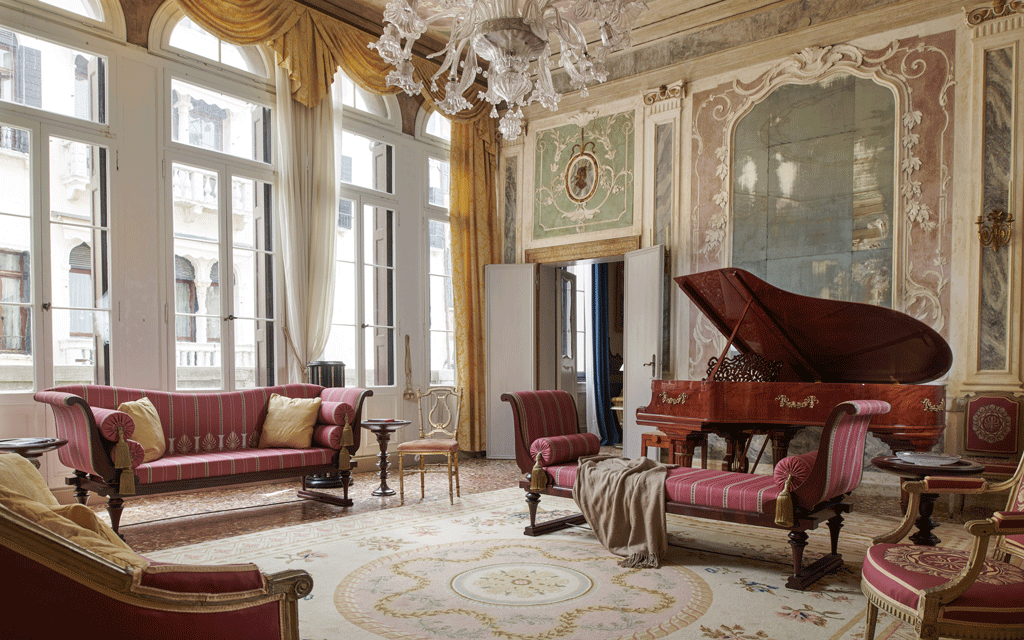 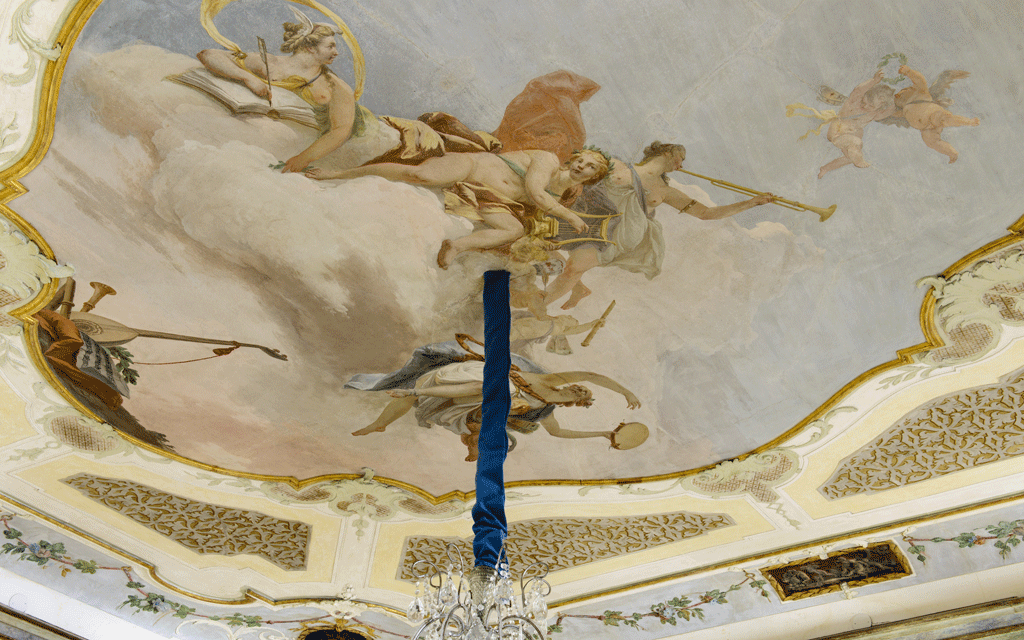 The ceiling in the dining room, which may formerly have been a music room decorated as it is with musical instruments, was painted by Cedini a pupil of Tiepolo. 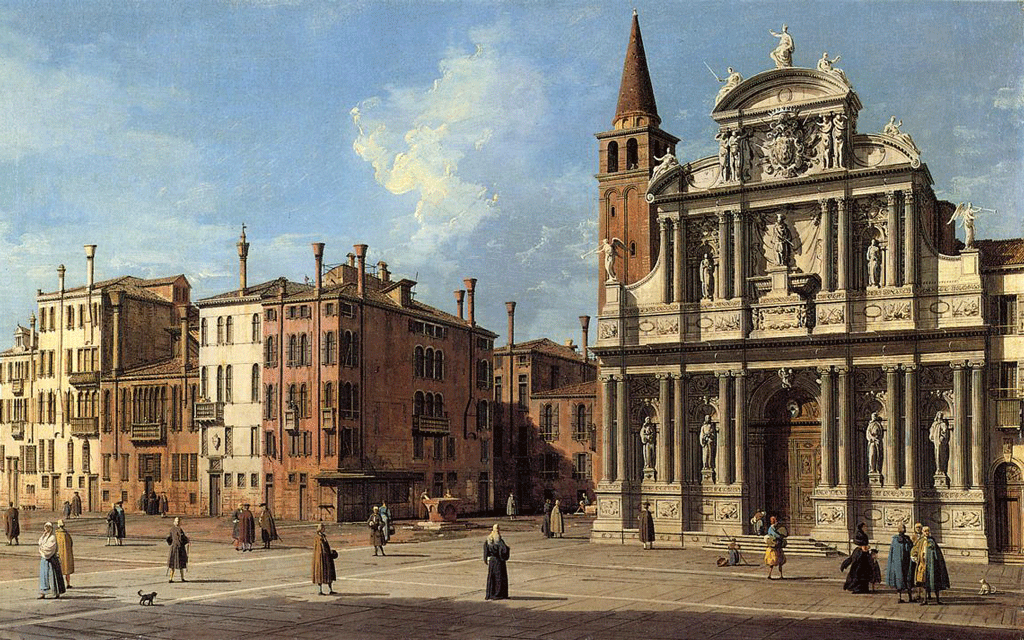 The palazzo dates from the 1600s. The Canaletto painting Santa Maria Zobenigo painted circa 1765 shows the Palazzo as it was originally built with only two storeys. The upper storeys were added in the 19th century happily leaving most of the earlier building intact. This was not unusual in Venice - as families grew additional floors were added with the mezzanino being added in last taking advantage of the high Floor to ceiling that previously existed on the ground floor and providing additional accommodation each time. The unusual thing here is that this has been done relatively recently by Venetian standards. 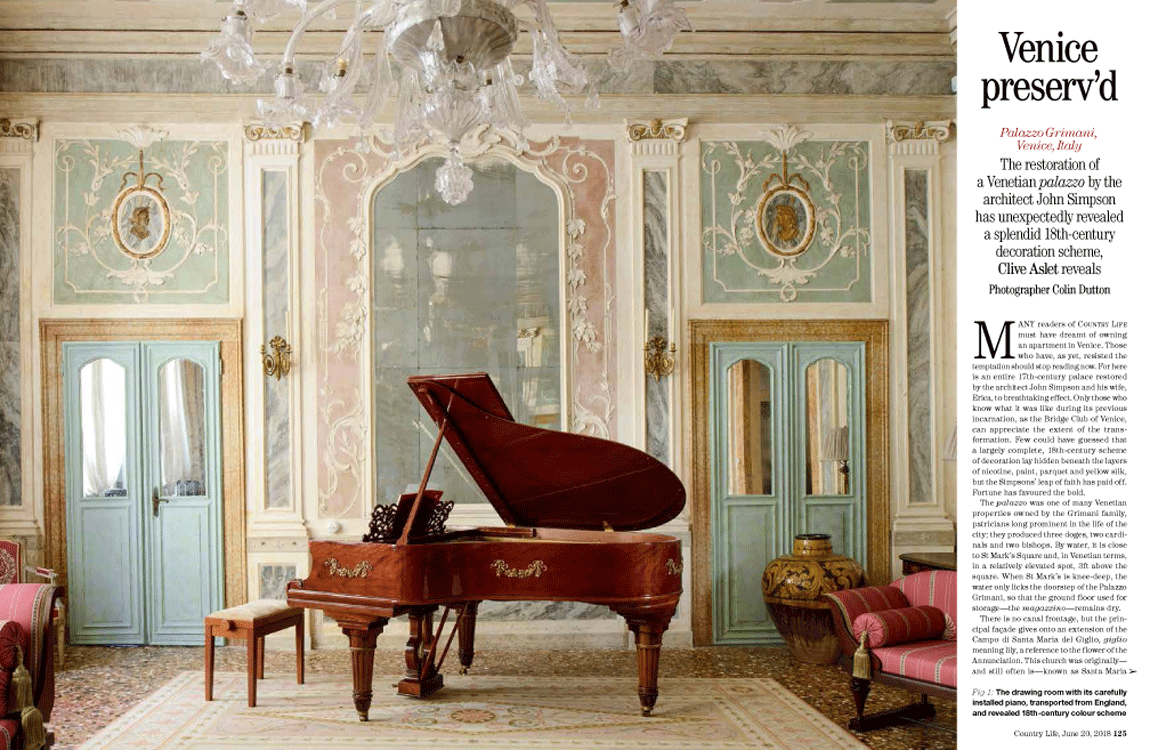 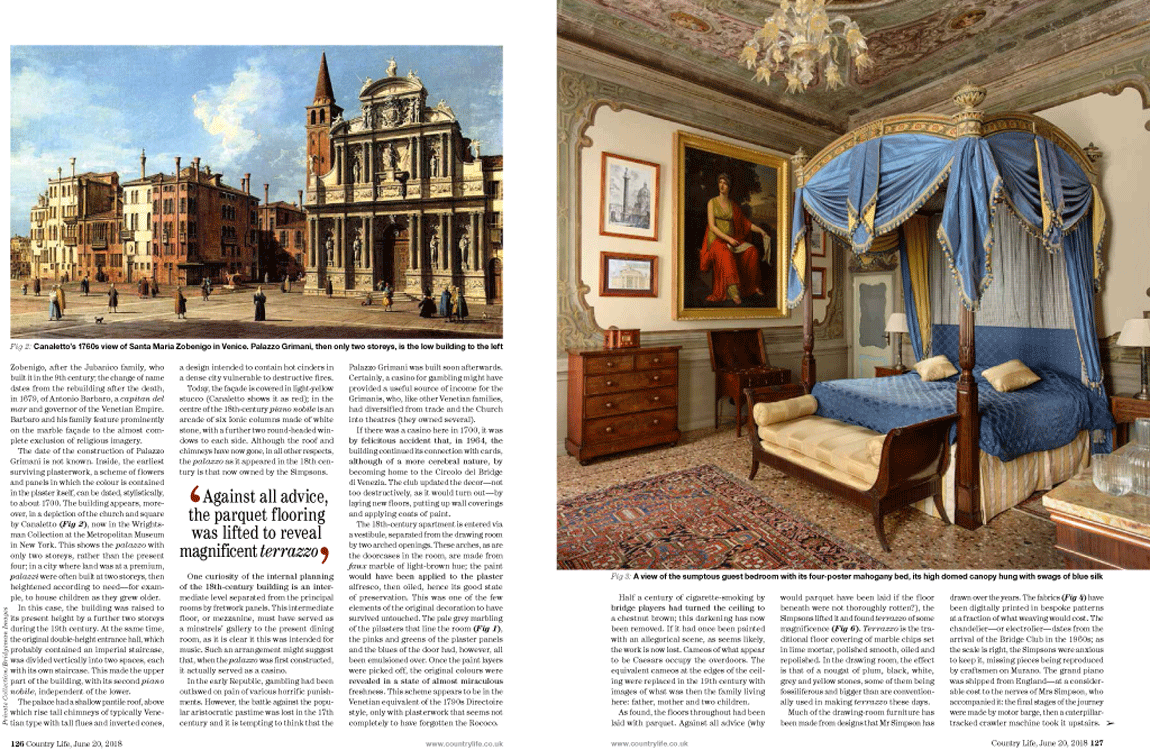 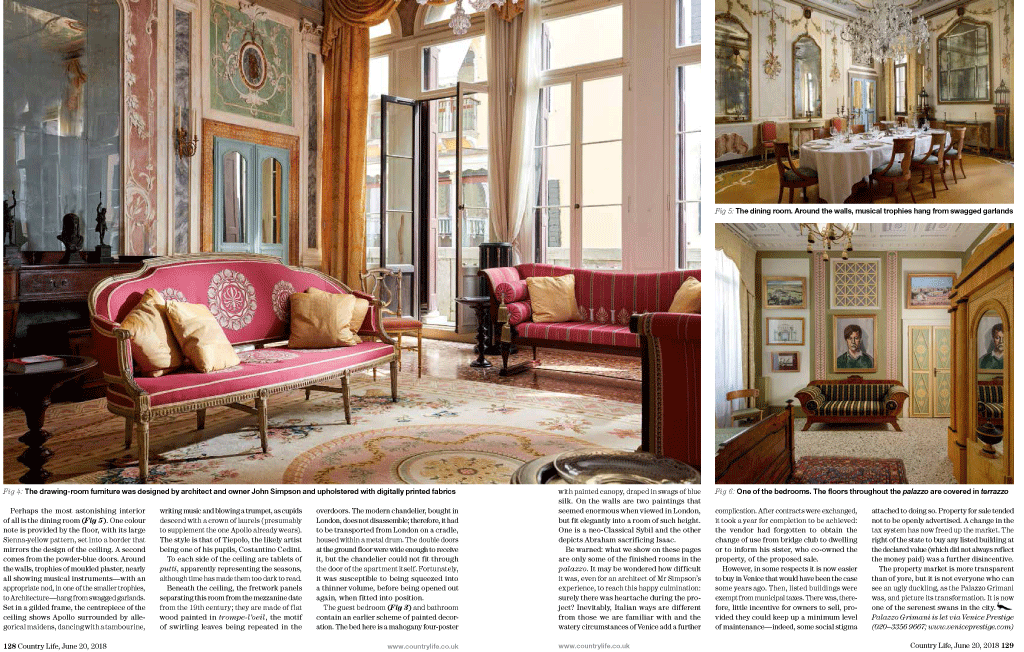